THE managing director of Northern Ireland’s leading renewable energy company, Amber Green Solar, said people in Northern Ireland must stand up and take control of their energy bills after Power NI announced an 18 per cent rise in household electricity bills which will take effect from July 1.

Dwyer O’Neill said people are so fed up with constant increases in energy prices because we are still too reliant on energy being sourced from volatile countries.

The massive price increase of 18 per cent announced on Tuesday cancels out Power NI’s 14 per cent cut which they implemented last October and is being implemented three months earlier than expected.

Power NI’s managing director, Stephen McCully, justified the huge increase in bills for Northern Ireland’s businesses, domestic bill payers and farmers as a response to world fuel costs over which the firm have no control. He said prices will be back to where they were in 2011.

The 18 per cent increase, which means the average household supplied by Power NI will pay an extra £90 per year, will also put even more financial pressure on small businesses and farmers who are already facing huge pressures of high energy prices.

Mr O’Neill said: “People in Northern Ireland wakening up to this news on Tuesday will no doubt have been horrified to learn of this added pressure.

“We have just spent three days at the Balmoral Show at Maze Long Kesh where hundreds of  people came to our stand to discuss adopting solar solutions to alleviate their already massive energy bills. We have had a very long and cold winter and people are already feeling the strain. For Power NI to hit people with yet another increase, and an 18 per cent increase at that, will hit people very hard.”

The price hike has been approved by the Northern Ireland Utility Regulator. Shane Lynch said the increase was necessary due to significant increases in wholesale energy costs.

Mr Lynch said: “We regret having to approve tariff rises and are aware that Power NI’s increase will add to the difficult times that households and businesses are experiencing.

“We only approve tariff increases after extensive scrutiny and have done so to ensure that this increase is unavoidable.”

But Mr O’Neill said people in Northern Ireland are becoming more and more aware that they do not have to put up with such excessive price hikes nor do they have to rely so heavily on fossil fuels from volatile countries.

Mr O’Neill said: “The solution is simple. Solar energy is becoming more and more popular and accessible across Northern Ireland and Amber Green Solar offer consumers in Northern Ireland with solutions to beat the 18 per cent energy increase announced by Power NI.

“Amber Green Solar has already offered solutions for hundreds of domestic bill payers, farmers and agri-businesses and other organisations across Northern Ireland, by installing reliable solar PV systems which are reducing energy bills, reducing their reliance on fossil fuels and offering people peace of mind that they are protected from price hikes for the next 20 years.”

Glyn Roberts, chief executive of the Northern Ireland Independent Retail Trade Association, said the price hike was “very disappointing” and said people must now consider renewable options as a must.

He said: “Renewable options have to be considered. Renewable technology is the only way forward in which people will actually be saving money. Going green as such is not a political correctness statement. It is absolutely vital and the return is upwards. We are all operating at the hands of a very volatile energy market. We need to get stability so we have to invest.”

Its teams are out and about helping people save money by generating their own renewable energy using solar pv or biomass. The Ulster Temple in Belfast explains why it switched to solar. 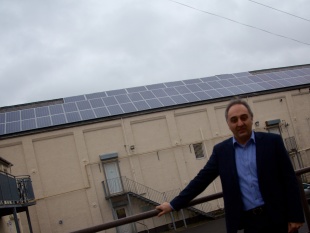 The owner of Waterside Warehouse is just one of the many business owners in Northern Ireland who is generating his own power by installing solar PV.

Sunny Ghaie has installed a 20kw system on his roof in a drive to reduce his £1,000 per month electricity bills.

“MGMPR Ltd has been employed by Markethill High School since September 1, 2012. The brief involves enhancing and developing publicity about the school for local media and ensuring the successes of the school are made known to new audiences, through both ‘traditional’ media and new social media opportunities. In all our dealings with the company, they have acted with clarity, diligence, sensitivity and initiative. Nothing has been too much trouble. I highly recommend MGMPR.”